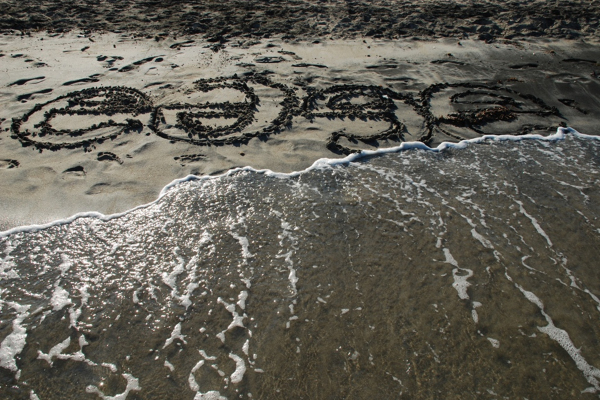 notes
I prefer to think of a wall as a blunt instrumental border within a landscape consisting of what Edward Casey describes as edges i.e. luminal spaces of transition. Casey identifies “that edges accrue within land and seascape in four distinct ways – rims, gaps, borders, and boundaries”[1]. Of these, borders are the only humanly constructed and mediated landscape system. In its most extreme, a border can be a wall: a cultural intervention or disruptions within the ecology of a landscape, seascape, or urbanscape. However, when thinking of the sea as a border, as in the case of immigration, rather than a boundary, it is difficult but not impossible to consider the sea as a wall: a wall of water with treacherous and retributive connotations combined with administrative and legal systems. I have create a base logo that can be turned and inverted, flipped and repeated to form the word “edge’. It remains flat or is folded, curved, or cut across the symmetrical horizon in this word of accumulative logos to be situated in, on, over or through an edge.
Rim e.g. the Grand Canyon. Similar to but distinguished from…
Gap e.g. an empty space. Similar to but distinguished from…
Boundaries e.g. unregulated spaces of transition between two types of landscape. Similar to but distinguished from…
Borders e.g. the regulated movement between and withincountries that may or may not be defined by rims, gaps, or boundaries.